As with many of the establishments I review, a friend recently suggested I peruse the whiskey selection over at the Pig & Pickle.  Tucked away in a strip mall in south Scottsdale along Hayden and Thomas, the P&P doesn't look especially promising from the outside. 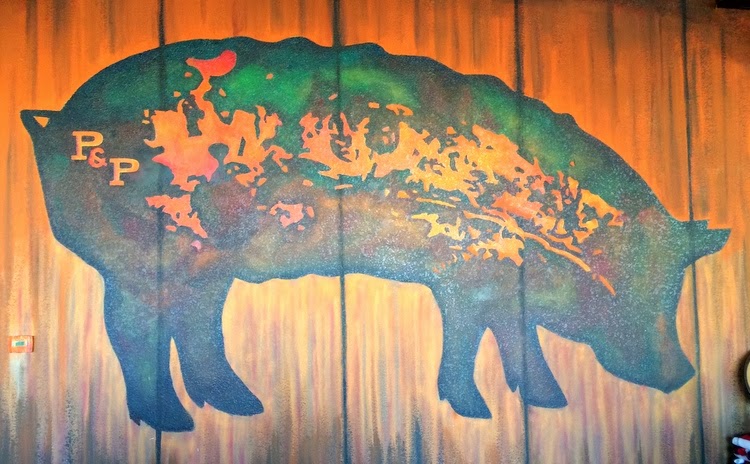 On the inside it is a mix of hipster bar and sports bar, though not completely pulling off either.  As you walk in you are confronted with one of the mainstays of hipster icons: the pig (which I think is ranked third behind  birds, and obviously bikes).

However, instead of the standard metal and wood aesthetic to maintain the hipster feng shui, the rest of the establishment is stainless steel tables and your standard hip-ish sports bar.  This just proves that hipster style has become so mainstream that owners/decorators are incorporating pieces of it, even if they don't really understand how to create the whole package.  Hipsters will not be pleased.  They'll probably write some angry prose about it while twirling their mustaches and smoking their pipes (it's reassuring that hipsters are generally a pacifistic bunch).

Why do all of my posts seem to return to hipsters and my love/hate relationship with them?  Probably because they're inextricably connected to whiskey, for better or worse.

Speaking of whiskey - as this is a whiskey blog - the P&P, as advertised, has a fair selection.  Unfortunately, they also have gone the Rokerij and Lux route of not having a whiskey menu.  However, when I protested, I was provided with a "servers' menu" which, while not listing prices, at least informed me of what was available without having to pester the barkeep.

I decided to go with the High West Son of Bourye (ignominiously listed as "SOB" on the menu to the right), which, if you couldn't guess, is a blend of a bourbon and a rye.  While most whiskies are a blend of grains, and often corn (making bourbon) and rye (making, you guessed it, rye), somehow this blend manages to highlight both.  Rather than being any other bourbon with high rye content (or rye with high corn content), the Bourye manages to somehow be fully both: a hypostatic union of bourbon and rye if you will.  It succeeds where the P&P fails at combining two divergent styles.

If you're interested in checking out some fairly good whiskies for fair prices in a slightly schizophrenic setting, the Pig & Pickle can be found here: