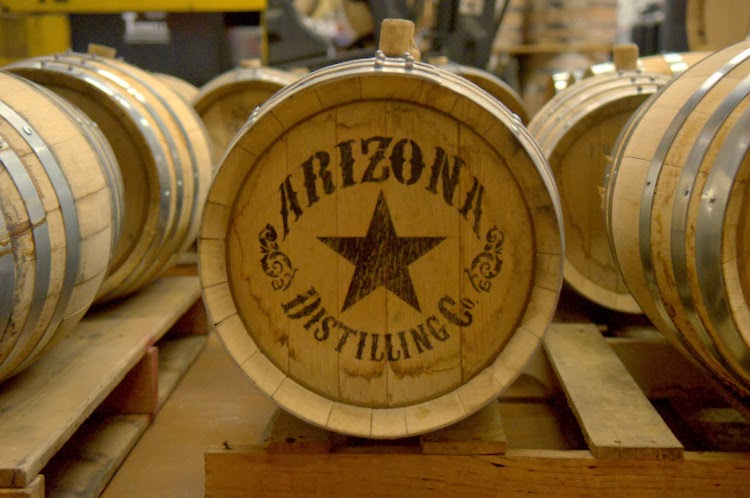 Just about two weeks ago Arizona Distilling Company started offering tours of their facility in Tempe.  Seeing as I am actively working to promote whiskey-craft (and whiskey-presence) in the Valley, I jumped at the chance to see the distillery firsthand.  My wife and I lucked into getting a private tour after another group bailed at the last minute.  Our tour guide was none other than one of the co-owners and Master Distiller, Jason Grossmiller.  I should note that "tour" is probably a slightly generous word as it was more of a stroll around the one-room distillery/rickhouse/ bottling center.  But what it lacked in amenities was more than made up for by Grossmiller who was as easy-going and approachable a host as could be hoped for.  Truth be told it seemed as though he craved some company.  He later informed us that most of his days are spent distilling, barreling, and bottling all alone in his giant one-room distillery. 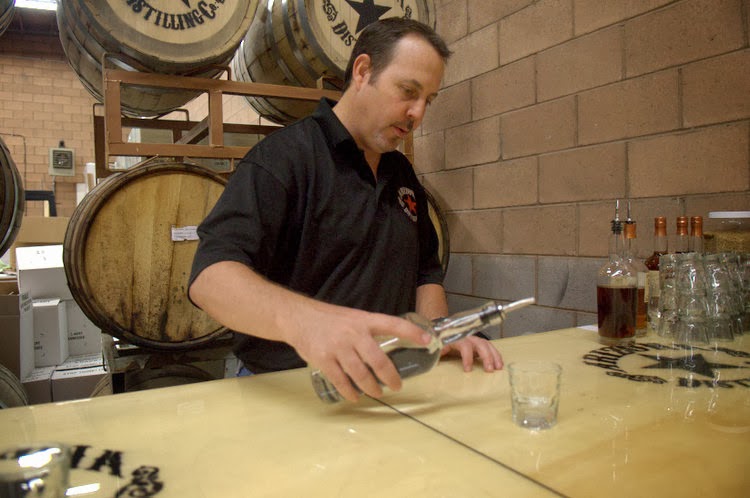 As with most brand new craft distilleries, AZ Distilling Co. is a small operation, though there are plans in motion to significantly increase production.  A three-hundred gallon still has been purchased to replace their current hundred-gallon still, and their product line should be growing over the next year.

AZ Distilling Co. uses a large number of smaller, 10-gallon barrels (as opposed to the industry standard 53-gallon) to accelerate the aging process (by increasing the wood-to-spirit ratio).  Also, because barrels aged in Tempe will get significantly warmer than their Kentucky-aged counterparts, the aging process may further shorten, though this has not yet been fully tested.  AZ Distilling Co., new as it is,  hasn't been aging whiskey for long enough to know exactly how this extreme temperature exposure will affect their product.  (It is also yet to be seen how the extreme weather, regularly reaching 100+ degrees in the warehouse in the summer, even with the swamp coolers, will affect the aging process of Grossmiller).

Currently, AZ Distilling Co. only has one liquor for sale -- their Copper City Bourbon.  It has a mash bill of 75% corn, 20% rye, and 5% malted barley.  For now they're sourcing their bourbon (as practically all craft whiskey distilleries are/have to until their product ages sufficiently), though they're currently aging their own Copper City with the goal of matching the current mash bill and flavor profile. 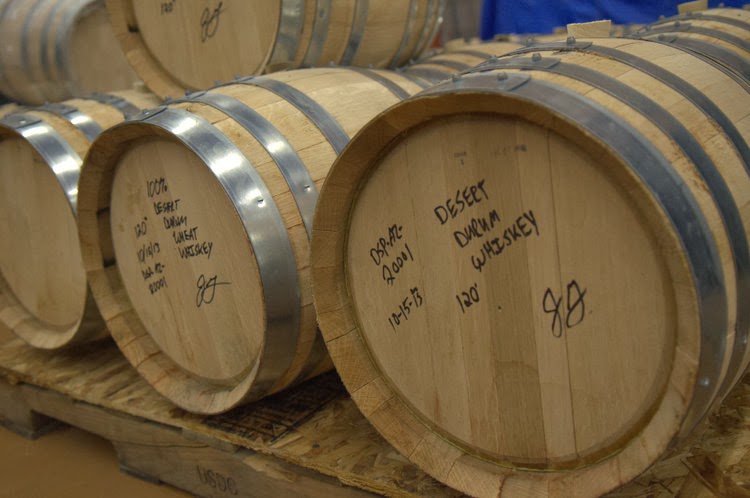 Grossmiller tells us that if all goes as planned they'll soon be adding a 100% wheat mash bill whiskey to the lineup.  Only one other distillery in the nation (Dry Fly in Washington, where Grossmiller studied before starting AZDC) has a 100% wheat whiskey.  "Wheaters" typically are very sweet in comparison to ryes (rye), bourbons (corn), or scotch (malted barley), but Grossmiller explains that using locally-sourced Desert Durum wheat, due to its heartier makeup, won't reflect a typical "wheater" flavor profile.  We tasted a sample and it was very good -- albeit young.  It didn't have any of the young, vegetal qualities typical of a young whiskey, but it did have some of that hot, unaged heat (not from high proof).  It had a little of the spicy quality that I'd think of when drinking a rye -- very unusual for a wheated whiskey -- but also somehow reminded me of a rum; very interesting.

Grossmiller tells me that they're also working to partner with a nearby rye farmer in order to produce some locally-sourced rye whiskey in the future.

I ultimately opted to wait until the Durum Wheat is bottled to make a purchase.  The Copper City was very drinkable, but, while there's nothing wrong with sourcing whiskey until you can age it yourself, I like the idea of buying something that's uniquely Arizona.

Please take the time to support this local distillery, owned and operated by local guys (Grossmiller is a fourth-generation Arizonan like myself), and working to obtain their grains locally, so that they can locally produce great whiskey (and possibly gin).

All-in-all it was a great experience, and it will be well worth your while.  But even if you don't want to do it for yourself, do it for poor Jason Grossmiller who is hankering for some human interaction.
Posted by WhiskeyPhoenix at 8:32 PM