By now I'm guessing you've heard that Sportsman's (32nd St. and Camelback) is going out of business.  There is a strong temptation to wax poetic given its imminent closing.  Words like "venerable" and "vestiges" keep coming to mind.  I'll try to refrain from going overboard, but it is always sad when a local place like Sportsman's, having been around since the 50s (in various iterations), goes out of business.

I talked to one of the staff, trying to figure out what happened.  Initially he was a bit short with me (understandably, as he's presumably losing his job), saying, "Bashas’ decided to shut us down.  I don’t know why, I just work here.”  Though, when I added that it makes me sad to see Sportsman's going away he softened a bit and said, "Yeah...makes me sad too."

I've been taught all my life that I shouldn't assume (lest I make an ass out of u and me), but I can at least guess that the big-box wholesalers may have had something to do with it. While it's still here (for another few weeks), almost everything is 25% off.  If you're just hearing about the closing now, you may be too late.  You can see in the picture, the shelves are already looking pretty depleted.

I talked to another customer who said his brother sent him a picture yesterday of the over $1000 worth of scotch he'd bought.

I witnessed another patron with what appeared to be the last four bottles of Glenlivet 12 heading to the register.

As for me? With little interesting left I picked up a couple of oldies, but certainly goodies: a bottle of Elijah Craig 12, and a bottle of Wild Turkey 101 -- for a total of just over $40.  Hard to beat. 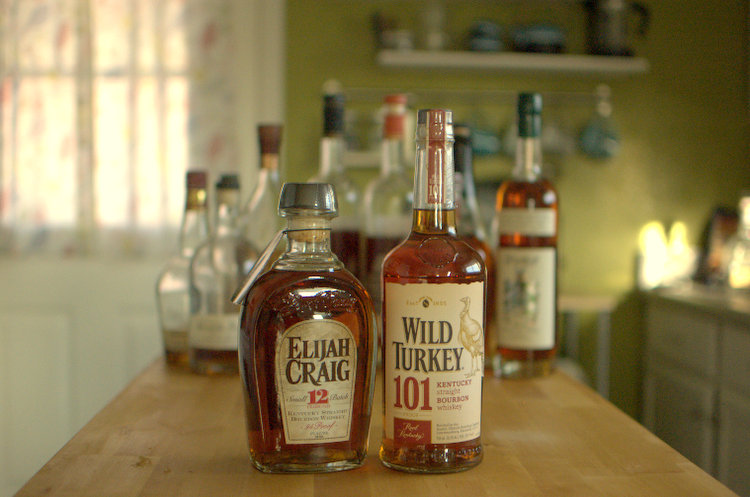